Can we use AI to make compression better? Yes we can! In this post I outline a compression algorithm for English text built on top of GPT-2 that achieves an order of magnitude better compression ratio than gzip (and is several orders of magnitude slower to run 😉)

At a very high level, compression works by identifying and exploiting patterns and redundancies in the source message. A common approach in compression is to use more compact codes for more common inputs - for example, you might compress English text by using fewer bits for common letters (like ‘e’), and more bits for rare letters (like ‘q’). Similarly, some character sequences are more common than others: for example ‘th’ is very common in English, while no words contain ‘tq’. Most lossless compression algorithms like gzip work by exploiting these kinds of byte-level patterns[1].

In addition to patterns at the character level, English has a lot of higher-order structure, at the word and sentence level. For example, at the word level, vowels in English carry little information. Therefore: mst ppl hv n trbl rdng ths sntnc. At the sentence level, consider the phrase: “I was born in France, then moved to Germany when I was 15. I still speak fluent _____.” As humans, we can confidently guess the last word is most likely “French”.

Generally speaking, a language model is a probability distribution over a sequence of words. That is, given some previous words in a text, a language model tells us what is the probability the next word is w? A straightforward usecase for this is autocomplete on your smartphone keyboard and (more recently) when composing emails in Gmail. It is possible to build a simple language model using n-grams, but recently neural networks have become very good at generating convincing text. A famous, recent, successful example of this is GPT-2 from OpenAI (take a look at some of the samples in that post to see how convincing this model is)

The fact that language models work means they can capture some of the structure in language. So, how can we exploit this structure for compression? A simple scheme might be the following: type out the input text on your smartphone keyboard, and every time the keyboard’s next-word prediction is correct, replace that word with a special character (let’s use underscores for now):

On my phone, after typing “It’s a nice “, SwiftKey suggests “place” as the main (middle) suggestion, so we can replace “place” with an underscore. Since the underscore is shorter than any word it might replace, the compressed message is shorter than the original. As long as I have access to the same keyboard (language model), and if it is deterministic, I can reconstruct the original text by replacing underscores with whatever the main suggestion is from the language model.

But we can do even better: the phone keyboard actually has 3 suggestions, not just one. Therefore, we might be able to compress even better by encoding runner-ups as well:

In this case, “with” was the second suggestion, so we can compress it as _1 (we’ll keep things zero-indexed). If the on-screen keyboard offered even more autocomplete suggestions (say, the top 10 runner-ups), we would have even more opportunities for compression.

Trying this out with a language model

Broadly, this is what I did:

By doing steps 1 and 2, we converted our original n-word text into a sequence of n integers. Step 3 still gives us n integers, so on the surface it’s not very helpful. However, the hope is that the latter sequence is more compressible.

Let’s visualize the token and rank distributions to check if our intuition holds.

Let’s take a look at the distribution of the 20 most common words (more precisely, tokens). As expected, a lot of it is punctuation and stopwords. In total, the top-20 most frequent tokens account for 42.6% of all the tokens in the text. 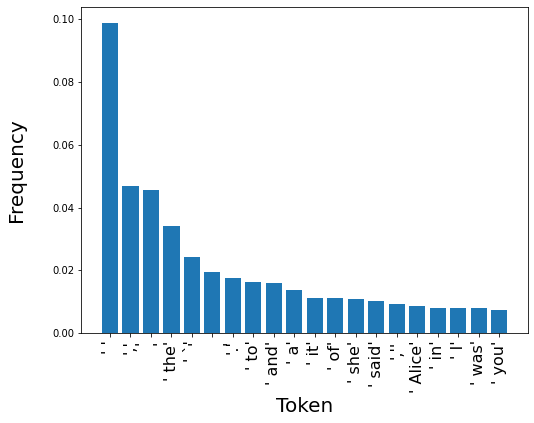 As we hoped, the distribution of the word ranks drops off much more quickly, and the top-20 ranks account for 82.8% of all the tokens. 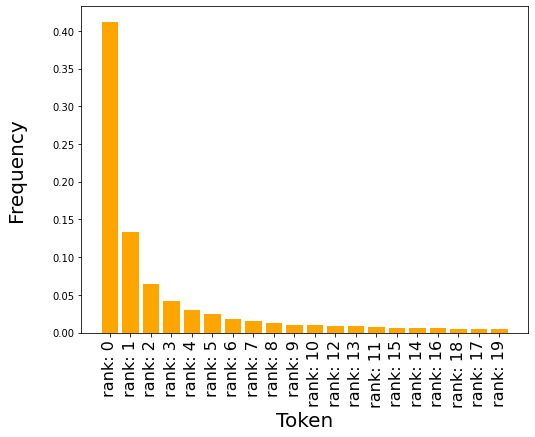 As an aside, note that a good langauge model, we expect lower-ranks (i.e. higher-probability tokens) to occur more frequently. This is mostly true here, though there are some exceptions - for example, the actual next token is the 12th likeliest slightly more often than the 11th likeliest.

This intuition is formalized in information theory, as entropy. Broadly speaking, a distribution has more entropy if sampling from it is more informative. For example, tossing a fair coin ({H: 0.5, T: 0.5}) gives us 1 bit of information, whereas tossing a completely biased coin ({H: 1.0, T: 0.0}) gives us 0 bits – it tells us absolutely nothing new. Another interpretation is that we need 1 bit to store the result of one fair coin toss.

Compressing ranks from the language model

How can we achieve this compression in practice? In Python, we could try using the builtin zlib function:

This reduces the tokens sequence to 48,138 bytes, and the ranks sequence to 33,377 bytes. There are 42,579 tokens in the sequence, so this implies ~9 bits per token, and ~6.3 bits per rank. This is a nice result, as it confirms that the ranks sequence is more compressible than the tokens sequence. However, the performance still seems suboptimal: theoretically, we expect every rank to compress down to ~4.37 bits, not 6.3.

One source of inefficiency is that zlib does bit reduction at the byte level, but we work with tokens of two bytes. Just to check if this is right, let’s build our own compressor. I used Huffman coding because the dahuffman library is available on pip and easy to use, but it should be possible to get even better results with arithmetic coding. In Python:

What about the frequency table?

That compression and building ML models are related is not a new idea. In fact, the website for the Hutter Prize, an ongoing competition for effective compression of text data, recognizes as much: they are motivated by the observation that “being able to compress well is closely related to acting intelligently.” This specific approach wouldn’t qualify for the Hutter Prize, because the GPT-2 model is too big. There is some academic work on using language models to compress text, as well as a very easy-to-use implementation (which unfortunately isn’t open-sourced).

Appendix: How do I actually run GPT-2?

For this project, I used Huggingface Transformers because it lets me easily swap out different trained language models.

Even though the purpose of a language model is to output the next token (singular; only one token), a lot of documentation out there is about language generation (i.e. generate many tokens). Maybe this makes sense considering GPT-2’s claim to fame is generating realistic-sounding text given only a short prompt. I found Huggingface’s blog article on generating text to be an extremely good introduction to this topic. For our purposes, a good summary is that, if our goal is to generate realistic text, continuously outputting the most-probable next token is just about the worst thing you can do.

However, this only gives us the most likely last word, and there’s no easy way to get generate to return multiple samples (though the above article on generating text is great for explaining what the myriad different arguments do).

Digging through the docs, it turns out we can get the model’s next token probabilities:

However, this is still inefficient because it causes us to rerun the model inference for overlapping sequences. For example, if we use a history of 20 tokens (i.e. len(input_ids) == 20), we would have to call model(input_ids[0:20]) for the first prediction, model(input_ids[1:21]) for the second prediction, and so on. To get around this, I had to modify the source code of the forward function to iterate through the actual tokens (not generated ones) and return the probability distribution on each pass.

Another practical consideration is batching: the model runs much faster with batches of tokens, rather than taking a single vector of tokens at a time. This is straightforward for compression, as we can split the input linearly into any number of consecutive batches. However batching is not possible for decompression, because we can’t decompress later batches without first knowing the preceding text. This means we can either make decompression unbatched (and therefore slower), or have multiple starting points (one starting point for each batch), requiring the model to warm up more times (and therefore achieve a slightly lower compression ratio).